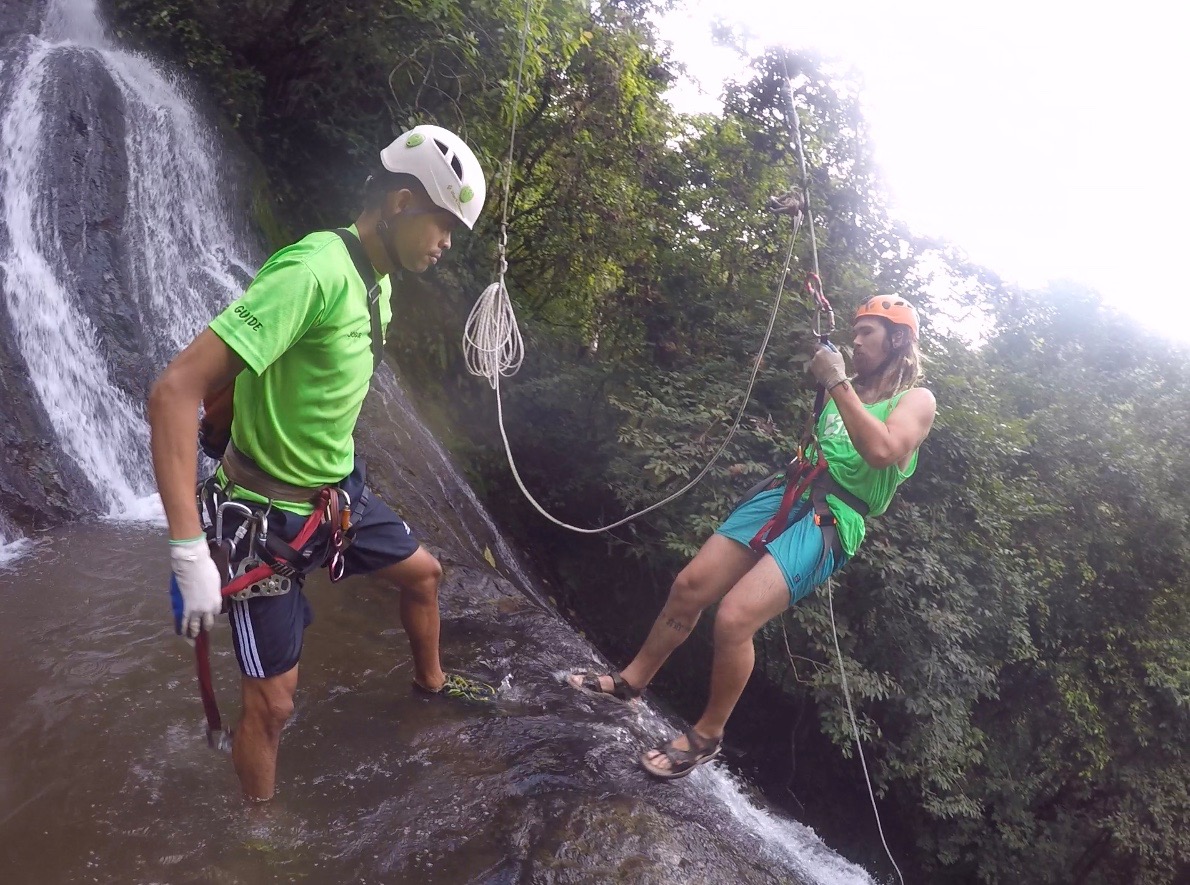 Cam and Chris Cullaz, two of our work for stay volunteers, joined 4 of our R2B guests on a waterfall rappelling tour in Jaco, Costa Rica.  Here is an account of their adventure!

I just arrived in Costa Rica and now five days later I was on a bus with Chris another volunteer at Room2Board, who also happens to be my brother, and four girls on vacation from New York who were staying at the hostel on a bright sunny Friday afternoon.  After driving down a dirt road past a bunch of cows we arrived at the adventure center and got situated with our harnesses.  We meet our guides Josh and Wilson and got introduced.  As we got geared up a group of 8 or so people ripped by on an ATV tour.  I will admit I was a little jealous.  That jealousy quickly faded as Josh, one of our two guides, was explaining what they had in store for us.

A twenty minute hike up to the waterfalls, a 200 foot zipline across to the platform where we would be begin rappelling down three sections waterfalls, a 50 meter zipline to a “monkey drop” followed by another twenty minute hike up to our second zipline which you pass on the first hike to the falls.  That was 200 meters followed by another zipline thats half a mile.  Yes, one half of a mile.  Thats nearly 900 yards, 2,640 feet if that makes it easier to envision.  I had to look it up too.  He had me at the waterfalls but when I heard half a mile long zipline and I was like, “Whaaaaaaat???” On another note Chris and I have never been ziplining before, so needless to say we were pretty excited. 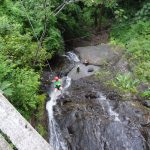 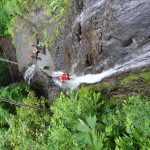 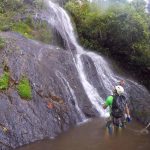 The whole walk up to the waterfalls our guide Josh told us about the rainforest we were in and how it was formed.  He pointed out where it was untouched by development or humans so its massively diverse with endemic flora and fauna.  All kinds of birds, reptiles, monkeys, frogs and mountain lions.  He explained that there was a treaty signed by the country to prohibit any kind of development or infrastructure in order to preserve the natural rainforest. 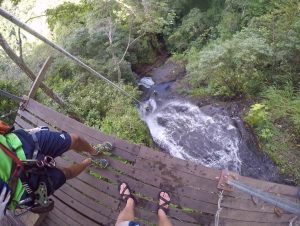 He found a termite home on the trail and asked if any of us wanted to try one.  I said, “Sure!” and Danielle, one of the New York girls proceeded to try one as well.  It kind of had a lemony taste to it, they were so small that the taste wasn’t very strong.  But they are 90% protein so if you need a snack in the woods, find some termites.  I don’t think there was a single part of the hike that we didn’t see leaf cutter ants walking in their lines.  Up and down trees, back and forth across the trail, it was fascinating.   In one direction the ants carry pieces of leaves easily 5 times their body size if not bigger, and the other way the ants are empty handed going to get more.  It was captivating how they all stayed in line and how organized they were.  Our guide mentioned that it was the females that carried the leaves and the males that mantained the trails.  He also told us that they are mostly blind and follow the pheromones given off by the insects.When we finally arrived at our first zipline.  Josh proceeded to go over safety tips, tricks and rules about how to handle the gear, what to touch, what NOT to touch, basic stuff.  My brother and I are experienced climbers, but neither of us have ever rappelled down waterfalls. Wilson went over first, and Josh sent us over one by one.  As you looked down you caught a glimpse of all the falls and when you looked out all you saw were rainforest covered mountains. 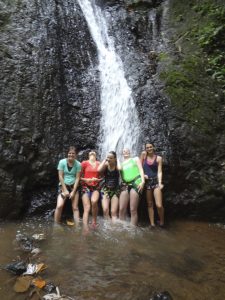 We were told to wet our gloves and get ready.  “Who’s first?” asks Josh.  The girls all looked at each other and said practically in unison,

“Ooooo baby lets do this!” I got down to the bottom where Wilson clipped me into an anchor in a little pool of water.  Sitting on the edge if you leaned back, it’s a long way down…so stay clipped in.  Then we all went down the second rappel that was a little more mellow. Earlier Josh said that for the third rappel had a surprise for us as he and Wilson chuckled.  It’s a good surprise.  I won’t spoil it.

We all made it down in one piece.  Now it was time for the “monkey drop”.  It begins with a 50 foot zipline out over the waterfall where Wilson controls your speed from below.  You are about 50-60 feet a 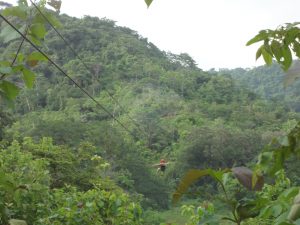 bove the ground. So don’t be mean to him, he has your life in his hands, literally.  We all made it out alive from that too.  It was then time to walk back uphill to the next zipline, so now we could take our helmets and gloves off.  On the walk Josh also showed us a begonia plant that is edible and very tasty, that had a nice twang to it that would make it perfect for a salad.   He explained about some of the trees and animals that were common in those areas.  Some trees there are over 300 years old and grow from the top down! I studied Sustainable Agriculture in college, so I always love learning new things about plants.

About 15 minutes later we arrive to the zipline we passed on our first hike up to the falls.

Now its time to coast.

The breeze felt so nice, the views were beautiful and it was the perfect time of day, late afternoon as the suns going down behind the rainforest covered hills.  Then it was time for the moment we were all waiting for.  The half mile zipline.  You can hang upside down, sit up right, whatever you want.  You have time to do it all.  You’re fly over a river and rainforest with mountains all around you being illuminated by the setting sun.  It was an amazing experience.  The late afternoon is the way to go, its not as hot as the morning and midday.  The line brought us right back to where we started, so no more hiking was necessary.  We got all our gear off and they had ice tea and water for us while Josh cut us up some very delicious pineapple that we all devoured.

All day the smiles never stopped.  The girls have been ziplining before and they said that this one was the best ones they have done.  So I guess we picked a good place to go ziplining for the first time! We all had a blast and would definitely put it under “Highly recommend.”

Check out this great video of the trip and join Room2Board on the Waterfall Rappelling Tour in Jaco Costa Rica!