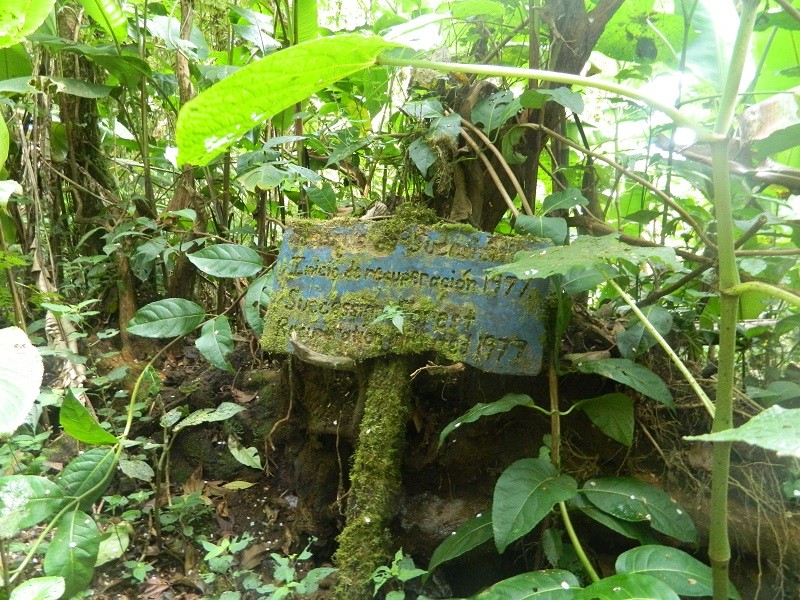 Journey into the Cloud Forest

After over 2 hours of dirt roads on the chicken bus, which followed a previous 3 hours excursion, we arrived in Monteverde. It didn’t take long before we understood why it is known as the cloud forest. After a few months on the arid coast which tops 100 degrees daily, this was practically heaven. 65 degrees at night; 80 degrees during the day; a brisk wind atop 5000ft of elevation, it was perfection. We were in a mountainous jungle setting, and it was really cool. 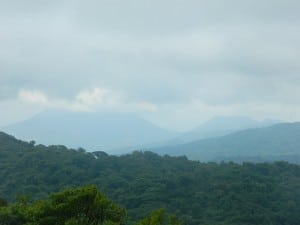 View from 5000ft + elevation in the cloud forest

Jim, a fellow I met who was staying at Room2Board decided to take a short trip to escape the heat. The first day was filled with fun adventures which included a canopy zip line tour. This takes you across valleys over 500ft high and a half a mile long. This tour was nothing short of awesome.

The next day was a nature day. Jim and I took a shuttle early from our hostel to Santa Elena National Park to observe some wildlife in the cloud forest. Ana, a German girl who we met along the way, hiked the trail with us. Dense mountainous jungle filled the landscape choking out most of the light that tried to sneak through. We came across many exotic species only steps after entering the park. Plants and mosses covered the surface of the trees, making every single tree a unique habitat for all sorts of creatures. 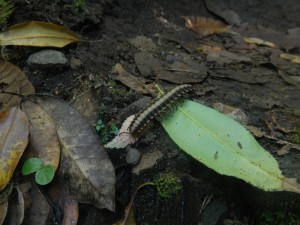 After a few hours into the hike, we stumbled across a woman in tall rain boots trekking a steep slope up towards us on the left. She was battling against thick jungle flora and fauna. We asked her what she was doing. With the combination of mediocre Spanish that Ana and I knew, we pieced together that there was a fresh river not too far down below us with clean drinking water. This sparked a conversation, and we started asking her for some more info. Although the natural beauty of the jungle was vibrant enough to enjoy the hike, we were slightly disappointed in the lack of wildlife we had encountered. So we inquired to the local woman where we could go to find the Resplendent Quetzal. This was a bit far-fetched because this is among the rarest Pokémon I mean birds in the jungle. It is a vibrant bird about 2.5 ft in length, with long iridescent feathers and a colorful plumage. We asked her if there is a place to commonly see them. She yelled to some friends down by the river who we could not see, and  we concluded from their conversation that there is an old rotten tree a bit further down the path where one particular quetzal nests. If we wait there we will maybe see it.

We had nothing to lose but time, so we continued on about 45 minutes until we thought we were in the right place. Having no idea whether we were or not, we popped a squat and silently waited and listened to the jungles sounds. While waiting, 5 minutes can feel like a lifetime. We started to second guess ourselves around the 10 minute mark. 15 minutes go by and we say okay just a few more minutes then we will continue on. I borrow Jim’s binoculars and scour the landscape. No sight of anything, and the jungle went silent. I look up towards the left where the rotten tree stands… and boom, perched upon a long thin horizontal vine is the rare Resplendent Quetzal. It was such a pure and exhilarating moment. I never thought we would actually see it; it’s so rare to see, but when those colors stood out against the green backdrop of the jungle, my heart nearly pounded out of my chest and I was ecstatic. I reach to notify the others without making a sound, and we all sat and enjoyed a brief 15 seconds of natural beauty before it flew off high into the canopy. We spotted it again and I took this blurry photo of its back… 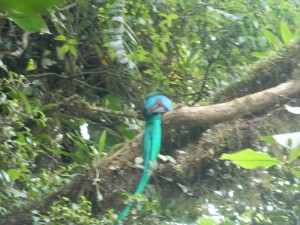 blurry photo of a Quetzal in the canopy

It was the first, but not the last stroke of good luck we had that day… If only I had brought my pokeballs…