“Now, all of you have been sitting here the past 5 minutes thinking Jimmy is a normal guy. Jimmy is not a normal guy”.  To be honest whether Jimmy was a normal guy  or not hadn’t actually crossed my mind. But to be fair to Juan, our tour guide, this was not a lie—Jimmy  (our boat captain) was not a normal guy. As Juan finished his introductory speech, Jimmy had lodged the boat into the riverbank and began to climb out, wearing only board shorts, a t-shirt, and a ball cap. As Jimmy trudged through knee deep mud and neck high grass, into the habitat of the Croc’s of the Tarcoles river, I could only be happy that I was sitting comfortably in the boat

Without the proper body armor I assumed he would be wearing, Jimmy then pulled a raw chicken thigh from his cargo pocket (probably purchased at the local supermarket) and began to slap the water with the chicken. Soon the eyes of a crocodile appeared above the water and as it got closer to Jimmy standing on the shore it slowly crawled out of the water like a dog coming to fetch a bone from its owner. Then, like any normal dog owner would do, he made the 3 meter long untamed beast work for its free meal. Crocodiles usually hunt at night due to the fact they spend most of the day thermo-regulating, their way of maintaining a safe body temperature in the boiling Costa Rica sunshine. On our trip I witnessed two methods of thermoregulation—either fully submerged with only their eyes above the water (to protect themselves from other predators while also keeping cool) or sitting on the shore with their mouth wide open due to the fact that its actually requires less energy for its mouth the be open due to their bone structure in the jaw. The latter tends to make for a quite comical and confusing scene, personally giving me mixed feelings as to whether I should laugh, or cower in fear. Their need to spend so much energy keeping their body temperature low during the day is probably also the reason Jimmy is still alive today. 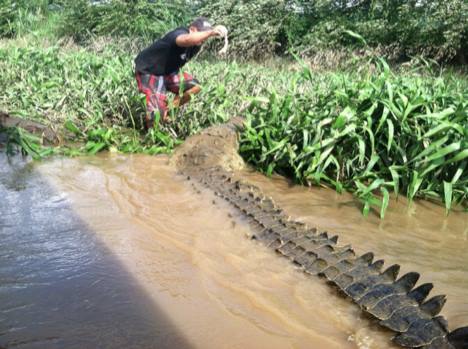 As we continued down the river, Jimmy toyed with crocs of every size and shape. I’m not sure if it was the amount of chicken that he had in his pockets that was more impressive, or his willingness to taunt the crocodiles with food, but I’m pretty sure his treatment of these wild beasts was still what took the cake. Jimmy never fed the same croc twice, and every time I began to worry about him with two hungry beasts ranging from 1-6 meters in size at his feet politely begging for food, he would finally give up the raw drumstick he had in his hand and the crocs would swim away, satisfied with a free meal.

The grand finale came when we arrived at the bridge, where about fifteen crocs lounged scattered along the riverbank. The stressful yet entertaining part of our trip then came to an end and we began to float back downstream. Jimmy was not fazed, and I was satisfied with my money spent, and I was surprised to learn there was even more to the tour. We were headed to the river estuary— or where the river meets the Pacific Ocean. Along our detour we were lucky enough to see lots of different Costa Rican wildlife. The Roseate Spoonbill was a favorite of mine, with its distinct pink feathers reminiscent of a flamingo. My favorite part is the nutrient rich root systems coming directly out of the water acting like stilts for the trees in the marsh-like environment.

I would highly recommend the crocodile tour with Jose’s Crocodile tours. It is a relaxing, yet very worthwhile experience offered here in Jaco. The commute is an easy 15 minute drive north in a comfortable, air conditioned van which picks you up right at Room2Board. After driving north on the highway you drive through a small, classic Costa Rican village which seems far removed from the “big city” of Jaco. The shuttle will drop you approximately 10 meters from your seat for the next two hours on the boat as Jose and Jimmy take you on a both relaxing and excitement- filled adventure.