So Costa Rica made it to the quarter finals of the 2014 World Cup. It was the biggest world cup story of the year by far. I mean, who could have predicted this? To answer that question, no one could have predicted this. Not only did they advance, but they came out on top of one of the toughest groups, facing Italy, England, and Uruguay? That is impressive. The ultimate underdog. 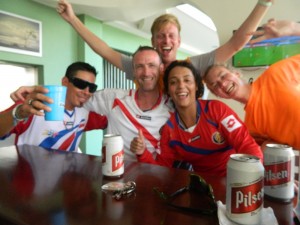 Watching the 2014 World Cup at Room2Board

The country is going nuts though, I mean, the whole country is just littered with nationalism and pride, as if people weren’t already proud enough to be from here. Flags on every car, Tico chants, new songs and dances in the streets, and endless parties. It doesn’t matter that they didn’t win, or advance to the semi-final, this has already been considered a win, and a story for a team that will be remembered in Costa Rica for a long time, at least until they do better. What a fantastic run by a complete underdog though, any soccer fan will give respect to this team for accomplishing what they have. They played like a five star team.

There is no question that curiosity about the country has certainly increased ten-fold since the 2014 World Cup began. A country of only 4.8 millions, which puts them at the second least populous country competing in the tournament, is finishing top 8 in the World. Who wouldn’t be intrigued by this marvel? Joy Olson, executive director of the Washington Office on Latin America, agreed “It has a real psychological boost to the country and how it’s perceived,” she said, opining that the attention could have a positive effect on several sectors of the economy, including tourism. (Excerpt taken from the Tico Times article by Zach Dyer). Basically, Costa Rica will surely benefit from this truly phenomenal run by the Tico nationals. It’s for certain that even though they faced a sad loss, which was incredibly close, against a renowned world class team (Netherlands), celebration is due.

Forever, Costa Rican soccer and their players will be taken more seriously, and you never know, we might see some of those national team players playing in Europe’s top leagues next season. Needless to say, it’s been an absolute blessing being able to watch the games with all the crazy fans and travelers coming through the hostel. From the Brazilians and Colombians, to the Chileans, and across the globe to the Australians, and then back over to Europeans and Americans, its been a blast! An epic World Cup run concludes for an amazing team. LOS TICOS!!!! 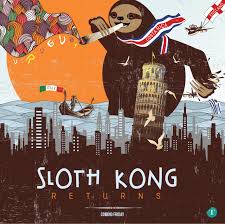