After landing in San José, Costa Rica in the afternoon, I made the short trip down to Playa Jacó and settled myself in. I planned to spend the next six weeks learning to surf, practicing my Spanish, relaxing and most importantly, marketing Room2Board, the new boutique hostel and surf school opening in December. 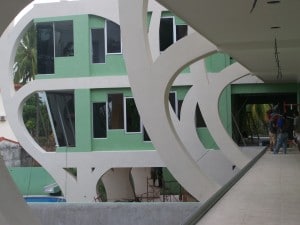 I spent the remainder of my first day unpacking and received a tour of Room2Board. The construction team was fast at work laying tile, installing lights, and getting everything completed for the opening in a just a couple short months. I was stunned by the size and detail present in the to be hostel, and am thrilled to see it completed.

The following day, I met with Wilson, one of the owners, and was granted my first opportunity to surf…a lesson! I have a couple of surfboards at my disposal, but was nervous about hitting the waves on my own.  Having grown up in Manhattan Beach, CA I’m comfortable in the ocean, though surfing has never been my forte. We scheduled my lesson for Saturday (2 days later) at noon, so the tide would be ideal. In Jacó, the waves are best at high tide.

On Saturday, I headed down to the beach to meet my instructor, Allen. On shore I practiced the art of standing up and then we took to the waves. First task: Make it past the break (the area where the waves crash). The small waves I paddle over and the big waves I flip the board over so the waves can roll over me. I’m starting to feel pretty confident, likely aided by the fact that Allen is helping to push me over the oncoming waves… regardless, I’m feeling ready for action. 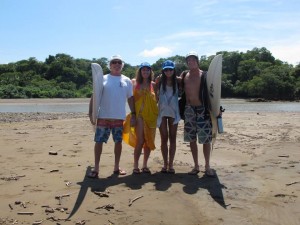 The most important piece of advice I can offer a first time surfer is…. be ready to fall. Luckily, this isn’t the same as falling while bombing a hill on a skateboard or wiping out on the mountain. Just remember to put your hands over your head, keep your mouth closed, and breathe out your nose. If you can remember those three things then you’ll avoid the worst of it. You’ll get tossed around a bit, but your bones should stay intact.

With those words of wisdom in mind I took off on my first wave (aided by Allen giving me an extra push), and I’m UP! Knees bent, back hunched and arms out. I’m surfing! I paddle back out and prepare to catch my next wave thinking, “I’ll probably fall this time.” But, again I’m up! Shocked by my abilities I catch a couple more until my body tires out and I retire for the day. I vow to surf on my own each day from here on out so I can show off my newfound skills when I return to the states.

My surf dreams proved to be slightly too ambitious and I haven’t surfed everyday since. However, I have gone out on my own several times and had a blast. Without Allen by my side, I’ve started to take a LOT more tumbles, but I hear that’s the best way to learn!