Posted by Katelyn Murray in Food and Beverages, Restaurants 16 Feb 2015

No matter where you are, the number one priority for a traveler (minus finding a place to sleep, but that’s easy just stay here at Room2Board) is finding a place to eat!  There are so many restaurants , the challenge is figuring out which are the best places to eat in Jaco.  After speaking with a few of our guests at Room2Board, I have some great recommendations to share with you.

In my opinion, Tsunami Sushi is my number one pick.  I am a big sushi addict and, although I also tried other sushi restaurants in town, Tsunami definitely takes the win.  With different specials everyday, I would say Wednesdays and Fridays are the best days to go because the sushi is half off (you really can’t get better than that!).  Because the sushi is SO good, there is usually a wait for a table (sometimes even an hour), but believe me, it is worth it.  Pictured above is the Bruce Lee and Crunch Roll that I delightfully enjoyed. 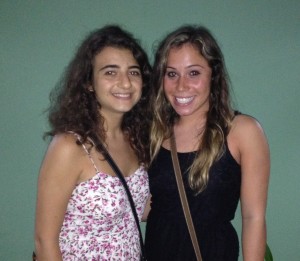 Donna Vatnick and Jennah Jacobs, two college travelers from Boston, MA, recommended Pajara Pinta and Cafe Namaste.  Pajara Pinta, by far was their favorite restaurant.  Staying open until 10PM, they could always count on it to be open when they needed it to be.  Although they were only in Jaco a few days, they ate a lot of their meals at there.  A few menu items they recommended are  spinach fettuccine with seafood, a gluten free and vegan brownie, and a grilled vegetables appetizer.  They also have killer mint lemonade!  I can attest to that! 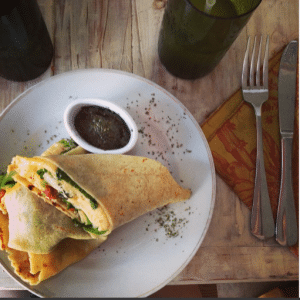 Café Namaste, located on Bohio Street, has a little bit of a different atmosphere.  It is conveniently located right next to the beach so it is a great place to pick up a smoothie on your way.  Donna got a peanut, banana, chocolate milk, which she wouldn’t stop raving about!  They also got hummus and falafel.  What they really liked about the café was the good vibes atmosphere.  It was very calm and earthy and the staff was very friendly.  Also, there are many healthy options to choose from. 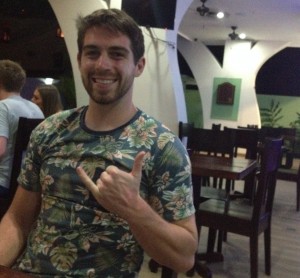 Matt Bissell, from San Francisco, really enjoyed Los Amigos.   With a live band playing and an outdoor patio, he felt very welcomed.  He described the food as traditional American, Mexican and Thai and ended up getting the yellow coconut curry with shrimp.  They allow you to choose the level of spiciness from 1-5, and he said the perfect level is a solid 3!  His table was also able to get a 3 Liter beer dispenser of Imperial to split, which he was very happy about.  Something else that is pretty awesome about Los Amigos is their Big Ass Smoothies, which are two for one at certain times during the day!

One last restaurant to take note of is Pizza Pata. Sean Hascup, from Stuart, FL, was able to try the Hawaiian slice at the Hermosa location after a long hike (and a passing kidney stone – don’t even ask, Sean has more stories about the really great and inexpensive medical care in Jaco then you want to know!) and he said it was exactly what he was looking for.  Normally you wouldn’t think about getting a slice with pineapple on it, but he reassured me the fruit here is to die for.  There was an artist there painting on the wall during his visit, which made it feel homey.  Overall, Sean highly recommends Pizza Pata, and you’re in luck because there is one in Jaco too!  (editors note: how did Sean manage to get into all 3 interns blogs???)

French toast and bacon from Room2Board

So I would be remiss if I didn’t talk about our own restaurant at Room2Board.  Chef Fernando cooks up not only some of the best typical Costa Rican food, he also has alot of Mediterranean choices on the menu – like his to die for humus and falafel salad or his shawarma.  And the pancakes and french toast for breakfast are amazing.

Of course, there are many more restaurants in Jaco to try, but with these great recommendations the above food joints are a must! 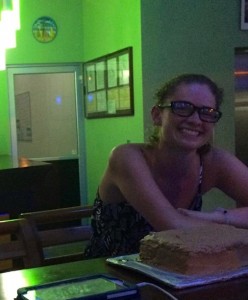 Katelyn celebrating her birthday at R2B.

Katelyn Murray is a sophomore at the University of Delaware.  She is an honors student studying hospitality and accounting.  When we called to talk to the hospitality department at UD, Katelyn answered the phone, well, the rest is history, she took the internship and spent the month of January at Room2Board getting some hands on experience. 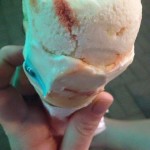 Truth be told, Katelyn barely missed a day without a visit to Heladeria El Barco for gelato!